Discussions on the vehicles used by the Axis forces. Hosted by Christian Ankerstjerne
26 posts

Please...I search any interesting photos from battle of Berlin...Berlin´s streets,Kummersdorf,Zossen...
Thanks !
Last edited by brano on 01 Sep 2004 07:53, edited 1 time in total.
Top

(Note: Since I no longer host the images I've put in links for Webshots images that someone uploaded there from my scans.)

Here's something I wrote up for another forum:

I've seen in other threads misinformation about the Maus tanks and their fate. Two hulls were completed. V1 had the simulated turret weight and gasoline engines, while V2 was completed with a full turret and diesel engines. Much speculation has been made about thier fate and combat if any. I'd like to clear some of these things up.

First, the Russians did capture both V1 and V2. Neither saw combat. V2 was in process of being evacuated from Kummersdorf and broke down at Stamplager, near Zossen. It was scuttled by the crew. V1 was captured in the vicinity of the western batteries of the Kummersdorf artillery firing grounds. V1 had the simulated turret weight on when captured.


The Russian Commander of Armored and Mechanized troops ordered hull V1 to be mated with the turret of V2. The Russians used six 18t half-tracks to pull the 55 ton turret off the burnt out hull. The combined V1/2 vehicle was completed in Germany and sent back to the USSR for further testing. It arrived there on May 4, 1946.


Turret protruding in upper left corner, soldier is in the rear electric motor compartment, large open area is the fighting compartment, and the cylindrical object down the center is the generator.
http://community.webshots.com/photo/338 ... 0923vjZBNT


Further testing was done, and when completed the vehicle was taken over by Kubinka for storage, and where it is now on display.

This is by far the best source I've found is this Japanese magazine:
[no pic] Here's the info from it though, "German Super Heavy Tank MAUS; Sergeev, Gelto; Model Art, Japan (1997)"

It is in both Japanese and English, and has a 9 page development write up, dozens of photos of the recovery of the two tanks as well as misc. photos of the inside and the automotive components, and many drawings of the mechanicals. If you can find one I would suggest buying it!

Tom Jentz's "Panzerkampfwagen MAUS" is also a must read for more history and technical background.
Last edited by Homerr on 05 May 2006 18:49, edited 2 times in total.
Top

Thanks for showing these great picture Homerr

What the ISBN number of this book ???

I've gotten a couple requests about this book I posted about, I've shot a little .avi of it so you can get an idea of more of the book. It's in Japanese but does have a few english words/numbers on it. The captions on the photos are in Japanese and English; and a 9 page section is also in English. There is a color section at the back of models done based on the destroyed V2 and and V1 as discovered by the Russians. Two fold-out sections with 1:35 drawings.

No ISBN number, it may be a glorified magazine in reality. It's like an expanded, more detailed version of a Ground Power magazine. As you can tell from the .avi there is alot of Japanese text to it, more than the 9 pages of English. I got this as part of an auction on Ebay and it was a nice gem in a pile of other gems it came with.

Anyway, Model Art seems to be a GREAT resource even if you can't read all of it. I suggest you pick up this copy if you can find it or one on another tank.
Top

Here are some pictures taken in berlin around march/may 1945: 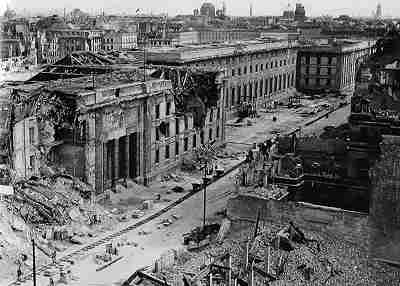 Also kind of rare, I believe

IS II with it's HUGE Machinegun (DShK)

I believe that's it... for now. Hope it helped!
Regards,
Sbf.Koch
Top

It is interesting to see, htat despite the heavy fighting that took place in Berlin, the buildings are still largely intact.

True, but some (like the t-34's driving down the street with german civillians looking at them) had titles like 'Red army tanks entering Berlin' .
So, I think they might have been taken in Berlin's suburbs, before the 'big' battle, or maybe in a street where not too much fighting took place...? What I do know is that all pictures had 'Berlin' in their titles...
Top

This is good artikles with more foto.
Top

Another one !
You do not have the required permissions to view the files attached to this post.
Top

From which vehicle is that hull?
Top

"...the buildings are still largely intact."

I wouldn´t say that...
You do not have the required permissions to view the files attached to this post.
Top

Pantherturm on Stahlunterstand.
You do not have the required permissions to view the files attached to this post.
Top

One of the pics made on the Potsdamer Platz and on the right side is the "Columbus Haus" and on the left side is the "Pschorr Haus". That is directly on the "Potsdamer Bahnhof" (Railstation) where the last position of the Tiger II #100 of sSSPzAbt.503 was.