Discussions on the equipment used by the Axis forces, apart from the things covered in the other sections. Hosted by Juha Tompuri
7 posts • Page 1 of 1

Could you specify which kind of bridging equipment as there was so many. Pontons, foot
bridges, dinghie bridges, tank bridges etc...

Thanks for your reply Cristoph.

I have only ever seen pictures from the Western campaign with what seem to be Barges crossing the Meuse.

I would be interested in any type of photograph of a bridge capable of transporting tanks and other heavy vehicles, as well as photos of pioneers repairing damaged bridges.
Top 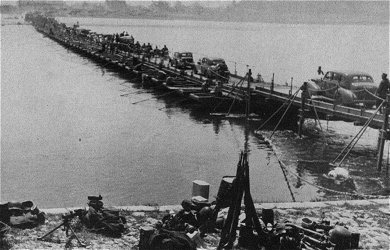 Engineers working on a bridge

These are great shots , thanks again for sharing.
Top

German Origins of the Soviet PMP and US Ribbon Bridge?

"...the Ribbon, as I have learned, was a design that the Germans came up with at the end of World War II. My information has it that plans fell into Russian hands and then the Soviets built the bridge. They called it a "PMP." I'm sure that has a great meaning in Russian terms somewhere. And they used it for many years. We have seen it in various exercises and things and were working very hard in the late `60's to copy it using whatever sources we could get.
During the.... Or [at] the end of the Arab Israeli war in 1973, a set of it fell into our hands. And so, reverse engineering became very possible and easy. They completed their design quickly and we fielded the bridge in `76, and it has been our mainstay as an assault float bridge ever since."

Is this true? Can anyone provide additional information on the German design or prototype?
Top
7 posts • Page 1 of 1