Discussions on the equipment used by the Axis forces, apart from the things covered in the other sections. Hosted by Juha Tompuri
26 posts

I am looking for information on the German Military bicycle of WWII. I am especially looking for line drawings, load plans, dimensions, and photos. I am also looking for individuals that have parts or whole bicycles for sale. I have seen some wonderful photos and read great discussions about the Truppenfahrrad at http://www.wehrmacht-awards. I was wondering if anyone else has other sites or books that they could recommend? I would like to aquire one in the near future and would like to learn as much as possible about them. Any help is greatly appreciated.Thank you.

Thank you for the Picture. I just found that site also. They have nice descriptions of alot of different military Bikes. Thanks again.

Nobody out there knows anything on the German Military Bicycle of WWII?

Fred Green wrote:Nobody out there knows anything on the German Military Bicycle of WWII?
Fred

Not at this time Fred, but here is another picture for you... 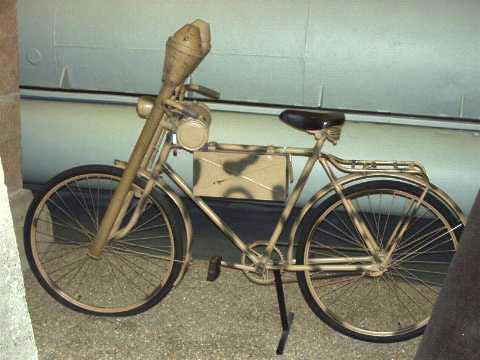 Please look at "On Tour" & "Referenzen", some interesting picture-material on the website.

* just kidding about the official designation, but the bike is real!!
[/img]
Top

I just got back from a Military show and to my surprise I found some wonderful photos on the Truppenfahrrad!! Wow! These are very nice and I have not seen these before .Thank you very much!!!

Hi Fred, I'm specialised in German WH bycicles and own 16 of them. The most bycicles on the pics are not originally equipped.
I try to hang on a pic of my 1937 Gustloff-Waffenmeister cycle with the ammo box for 5.0cm mortar M36.
You do not have the required permissions to view the files attached to this post.
Top

Nice picyure of your bike. I am interested in the basic version that the infantry soldier would have ridden. Is there a Table of Organization and Equipment (TO&E) that would show how the bike was equipped for a certain platoon or company?

I have gathered alot of different photos off of the web but I haven't found any line drawings yet. Would you happen to have any?

The most cycles used in WW2 were standard "Herrenrad" with triangular frame and 28" wheels.
Special equipment for Wehrmacht use was: the steering bar, the saddle, the toolbox and the porter at the back. The headlamp had to work with dynamo and/or battery. On the steering bar were 2 holders mounted which were holding the half-shelter tent or the drivers trenchcoat.
Cycles which were manufactured especially for the Wehrmacht had a stronger frame with thicker tubes than civillian cycles.
Normally the cycles were just black without linings or manufacturers marks. A serial-number and the year of fabrication were stamped under the saddle.
Occupied cycles were used as they are in wartime, sometimes they were rebuilded with the special parts from above, mostly they stayed as they were. Equipment was fixed then with various webbing or leather straps as available. Sometimes the weaponmaster or engineer platoons made mounts by themselves to fix all kinds of weapons and equipments to the cycle.
There were also civilian cycles used by official person. Those were similar to the military ones. E.G. there were cycles for German Reichspost, Police, air-raid service men, red cross, Arbeitsdienst (R.A.D), Hitleryouth ( famous bike was the "NSU Wehrsport" series) and also for lower function NSDAP personnel like "Blockwarte" .
You do not have the required permissions to view the files attached to this post.
Top

Underneath you see a picture of the basic version of the german WH cycle for enlisted men without any special function. This picture shows the cycle in the trim before WW2 begans. In wartime every member of a platoon had to carry spare ammo, parts or additional equipment in special mounts or boxes.
You do not have the required permissions to view the files attached to this post.
Top

Tobi1418: beautifull pictures !! do you by any chance have a Truppenfahrrad for sale ?

Love to own one someday

tobi1418 wrote:Hi Fred, I'm specialised in German WH bycicles and own 16 of them. The most bycicles on the pics are not originally equipped.
I try to hang on a pic of my 1937 Gustloff-Waffenmeister cycle with the ammo box for 5.0cm mortar M36.

That is one of the most beutiful Truppenfahrrads I have ever seen. I would love to have one of those for my collection but being in the United States finding one (a real one) would be a challenge. Any idea on how I can obtain one in Europe and have it shipped to the US. Again beautiful Truppenfahrrad, and 16 of them!

Can someone tell me what the seat size roughly is on a period WWII fahrrad? I have a seat for my new fahrrad and want to make sure it is the same size. It looks identical in a profile shot but I an uncertain how "big" the seat is. Mine is about 10" by 7.5".
Top

Still have 2 truppenfahrrad's for sale in the US, PA to be precise.

Email me for price and details.