Lt. Colonel., please mention the sources for the photos.
Top

My favourite is the one from Foca

- even wated it as an avatar,but alas...

Superb photos from Drvar, Jure! Never seen them before. Here is one of excellent quality,courtesy of Mr. Paddy Keating from another thread. Just look at that smart uniform they're holding. Who in the world could be an owner?

Who in the world could be an owner?

Well,he got very good reasons to leave uniform where it was,more than 800 paratrooopers were trying to harm him,and only exit open for escape was 15 meter gap under his HQ, so you need to be very fancy to care about one uniform. At that time I don`t doubt that JBT would exchange all his unform for stronger ladders.
Kingdom for a horse!
Top

At that time I don`t doubt that JBT would exchange all his unform for stronger ladders.
Kingdom for a horse!

This indeed was a good one!

Still , having that old sminker in mind, I wouldn't be too surprised if the escape plan went off schedule because he forgot his favourite shirt back in his room.

Enough of this slanderous and counter-revolutionary ranting!

I was always puzzled with his escape route. Anybody got the plan of the cave? Who was with him at the time of the escape?

Since we are in Drvar,here are a couple of pics from an excellent site on Drvar http://www.mojdrvar.tk/

Tito and his staff in front of the cave

Bodyguards in front of the camouflaged HQ

Leftovers of a German glider in Drvar

With JBT was group of fighters from Escort batallion, during their escape from HQ(they climbed one by one using a rope),one fighter was shot by german machine gunners while he was climbing down.I have seen pictures on this forum(from Mr. Keating) that shows germans firing MG from their positions in the church in the direction of the cave-maybe that was fatal shot. JBT and small group of bodyguards reached the end of the gorge,runned over small open area and than climbed into mountains far from danger.
Interesting is that german commander had second wave of paratroopers at his disposal(still in air) and could order them to close JBT`s escape route but he didn`t do so. Reasons why he didn`t do that are unclear-maybe he wasn`t sure that JBT is in that direction,or he recived reports that partisans reinforcements arrive,so he needed second wave of paras in Drvar.
Top

Thanks for the info. Could you direct me to that photo of a MG firing?

I can tell Arso Jovanovic,second from the left. Who are the others?
Top

And another addition from the same site (author realy did a great job on the site-you don't see it everyday in our parts.); Rare photos, I believe.

Paras and the partisan jeep.

Paras at the church

I remember I have seen picture of MG crew in Drvar somewhere on the forum. I`ll post a scan from Husar tomorrow, the man on the left could be Koča Popović, but I´m not sure.
Top

According to Rankovič's wife present in the cave were: Josip Broz-Tito, Edvard Kardelj, Aleksander Ranković, Sreten Žujović, Ivan Milutinović, Arsa Jovanović, Nikica Prlja (Tito's body guard), Davorjanka Paunović (Tito's secretary), Vlado Miklavec (Kardelj's body guard, he was the one shot by Germans (apparently a sniper) while climbing down), Olga Humo (Tito's translator) and Slavka Becele (cypherist). That's it, no soldiers from the Escort battalion. When the Germans started threatening the cave, Ranković left it in order to organize the defense and escape route (Jovanović and Žujović followed later). All he could find on top of the cave were two Slovenian partisans from the group of the infamous Ivan Maček - Milan Zabukovec (Maček's bodyguard) and Janko Mehle - and Vladimir Velebit's messenger Tone Sotler. They were later joined by two more partisans from Maček's group Ivan Hiti and Žan Horvat.
Top

Thanks Mark very much! Where do you draw your info from? One thing I cannot understand-did they climb up,or down? Way I got it in my head,the little house which served as HQ was built amid the cliff and above a stream . And who the hell stopped the paras from entering it,if there was practicaly no guards? Did the cadets or Lika boys press from behind,not allowing the paras to concentrate fully on the cave?

One thing I cannot understand-did they climb up,or down? Way I got it in my head,the little house which served as HQ was built amid the cliff and above a stream.

Yes, that's basically the way I understand it. The house was situated in a small cave above a 15-meter waterfall, which flew into the Unec stream in the valley, where the elements of HQ Escort battalion were situated and blocked the Germans. Tito and his escort escaped from the cave, climbing down the robe made from parachutes and then climb up and made their way to Gradina - it would also seem they didn't have contact with the escort battalion 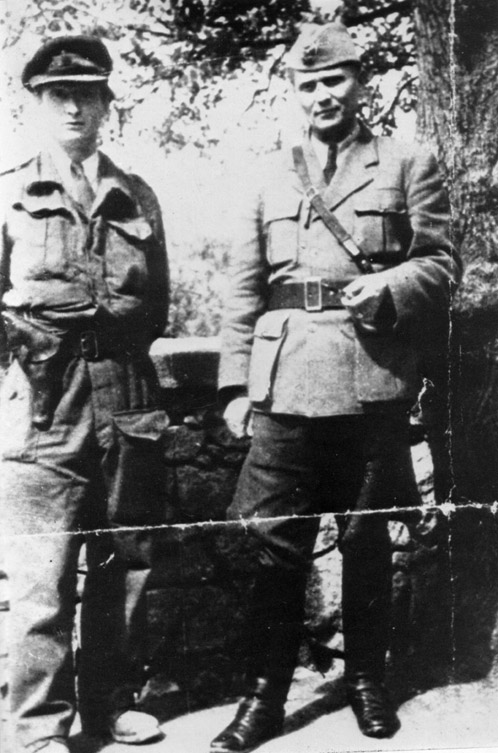