Discussions on all aspects of Imperial Germany not covered in the other sections.
7 posts • Page 1 of 1

Does anyone have any photographs and biographical information about the German Infantry Lt. General Karl Litzmann?

I understand that Litzmann took the city of Lodz on the Eastern Front during the First World War, and that Lodz was renamed Litzmannstadt in his honor after the Germans took it from Poland in 1939. I believe he died in Germany in 1936. 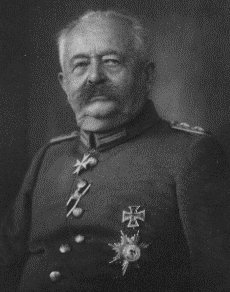 
Youth and French-German war
Karl Litzmann is born on 22 January 1850 in Neuglobsow as a son of a landowner. it steps 1867 as Fahnenjunker into an engineer regiment. After Litzmann 1867 visited the war school in potsdam, he attained one year later the officer patent and occurred a pioneer Batallion. In the French-German war 1870 it participated as a member of a Brueckentrains. Into March 1871 it marched with other units in Paris, where Litzmann receives the EKII.

After numerous transports and many posts (among other things at the war academy) Karl Litzmann is appointed 1886 into the general staff, where he is subordinated to the legendary GFM Moltke 1895 to the Colonel and 1898 to the major general it remains carried in the east of the country stationed and helped e.g. with the improvement of the land military nature. Starting from 1901 he takes over the post of a division commander (39.ID) in Colmar. Litzmann philosophiert in next time much over an army reform, which is rejected however by the emperor, whereupon Litzmann is discharged as a lieutenant general.
At the 2.August 1914 Karl Litzmann is re-activated as a general into the active military service. He becomes commander of the 3. Guard infantry division. After numerous engagements and battles Litzmann takes le Merite on 24 November Brzeziny unexpectedly and receives for it the Pour lent. At the same time it is promoted to general of the infantry and takes over that 40. Reserve corps. At the 23.Juli that seizes 40. Corps the fortress Kowno on, which kapituliert on 18 August. Numerous cannons and thousands prisoners are made. Litzmann receives thereupon as one of few golden oak leaves to the Pour le Merite. After it befehligte further units in the east, it came 1917 to the west front and kommandierte troops during the large spring offensive, which failed however. Therefore he requested around his dismissal, which only 1918 one agreed. Karl Litzmann died to 28.05.1936.

Sorry if the translation is funny, blame Google

Hope thats some help to you

That is a great help.
Top

For reference, here's a photo of Hitler meeting with General Karl Litzmann in the early 1930s. It appears on the wonderful site, http://www.thirdreichruins.com/

VJK
You do not have the required permissions to view the files attached to this post.
Top

From: http://pro.corbis.com/
You do not have the required permissions to view the files attached to this post.
Top